Drought in Plants: Causes, Consequences and Possible ways to overcome it 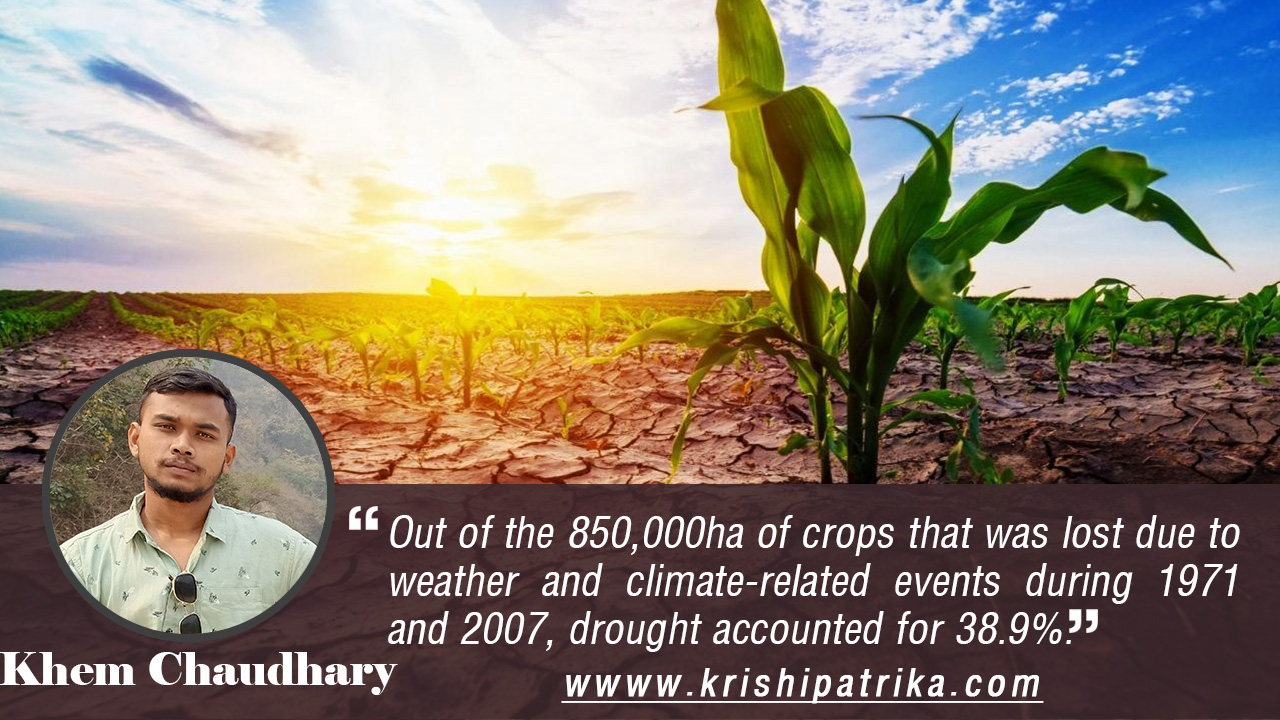 Drought is one of the major environmental stresses that affect the productivity of crops and occurs for several reasons including low rainfall, salinity, high and low temperature, and high intensity of light. Drought is a period when an area or region experienced below-normal precipitation. Drought is multidimensional stress and causes changes in the physiological, morphological, biochemical, and molecular traits in plants. The lack of adequate precipitation, either rain or snow can cause reduced soil moisture or groundwater, diminished streamflow, crop damage, and water shortage. Drought can last for months or years or maybe be declared after as few as 15 days. Annual dry seasons in the tropics significantly increase the chances of a drought developing and subsequent bush fires. Drought Conditions are favored by high evaporative demands and more persistent dry spells associated with rising temperatures. The devastating impacts of drought on society have resulted in many global assessments of future drought conditions. Drought stress can occur at any growth stage but the drought stage at the reproductive stage can directly result in an average yield of loss of more than 50%. Drought is a recurring feature of the climate in most parts of the world. Due to climate change, regular drought becomes more extreme and unpredictable. There are mainly three ways to determine drought

If the dry weather persists and water supply problems develop, the dry period can become a drought. Plants experience drought either when the water supply is to their roots becomes limiting or when the transpiration rate becomes intense. In case of high soil salinity and also in other conditions like flooding and low soil temperature, water exists in soil solution but plants cannot uptake it. Drought occurs under arid and semi-arid climates. Regions with adequate but non-uniform precipitation also experience water-limiting environments. When a particular area gets less rain than usual, the soil gets much less moisture. The soil starts drying out and plants die. Despite these, some of the natural and human activities that cause drought are:

Due to depletion in soil moisture, there is less evaporation of water.

Plants need large amounts of water and nutrients throughout their lifecycle and all aspects of plant development are affected by a reduction in water content in the soil. This reduction in soil moisture leads to changes in the physical environment, which subsequently affect physiological and biochemical processes in plants. Drought can cause nutrient deficiencies, even in fertilized soils, due to the reduced mobility and the absorbance of individual nutrients, leading to a lower rate of mineral diffusion from the soil matrix to the roots. Water is required for processes such as germination, cell division, and elongation for the promotion of plant growth in height and width and metabolic activities, such as the synthesis of organic compounds, photosynthesis, respiration, and several other physiological and biochemical processes. Drought triggers a wide variety of plant responses. Plant growth is altered, with changes in the architecture of individuals, which are translated into lower height, reduced leaf size, a smaller number of leaves, less fruit production, and changes in the reproductive phase.

Nepal is one of the most vulnerable countries concerning climate change. Nepal experienced drought in 1972, 1977, 1982, and 1992. Drought mostly occurs from the end of March through June. Some parts of the Trans- Himalayan region are extremely dry throughout the year. Droughts are more common in the lowland and the western of the hill. The country received more than 50% of average precipitation during the period from November 2008 to February 2009. Several incidences of drought were also observed during 2012,2013 and 2015. Within hill farmers, marginal and poor farmers and women with limited access to resources and livelihood options are most affected and at a greater risk. Impact on crop production and productivity, due to drought, might be explained as a result of declining availability of water for agricultural uses, hindrances in the operation of conventional irrigation systems, decreasing efficiency of water use, increasingly degrading agricultural land, and epidemics of diseases and pests. Some farmers have already abandoned some of their important traditional crops like rice, pulses, different cereal crops, tuber, and sweet potato. They cited that lack of sufficient water, crop-specific diseases, low production, inadequate benefits, and unfavorable climate were the major reasons for this decision. A study by UNDP found that about 90% of crop loss in Nepal was caused by meteorological hazards (Droughts and Floods).In this study, drought had the most severe impact on crops. Out of the 850,000ha of crops that was lost due to weather and climate-related events during 1971 and 2007, drought accounted for 38.9%.

Therefore, the impact on crop and productivity is likely to be mostly negative, endangering food security in the future if the current climatic scenario continues.

Drought stress can be minimized by the adjustments of agronomic practices such as sowing time, plant density, and soil management also by the production of the most appropriate plant genotypes. Efforts have been made to produce drought-tolerant genotypes using the knowledge of the responses of plants to drought stress and mechanisms. Some of the possible management practices are described below:

Seed priming is a technique by which seeds are partially hydrated to a point where germination-related metabolic processes begin but radicle emergence does not occur. Primed seeds usually exhibit increased germination rate, greater germination uniformity, and possibly greater germination percentage. It has been applied in various regions to overcome drought stress effects in a range of crop species.

Agronomic approaches such as mulching, conservation tillage, intercropping, early sowing, selection of crops and their varieties, and micro-irrigation are technically feasible and economically viable options to overcome drought problems in crops.

Water is generally stored in rainwater tanks which recharge groundwater. The main objective is to store excess water in the underground aquifers during times of surplus which can be recovered during the scarcity of water.

Drought is affecting over 30% of the world’s agricultural land. Our agriculture is dependent on water availability but water resources are declining day by day because of overexploitation and misuse. Global warming increases the problem of scarcity by affecting rainfall. It is expected that this problem will be more in coming years. The main solution to drought in Nepal will be the conservation of water and possible attempts should be carried out to check the evaporation from the soil as well as reservoirs. Therefore, there should be proper and effective management to overcome the drought problem.