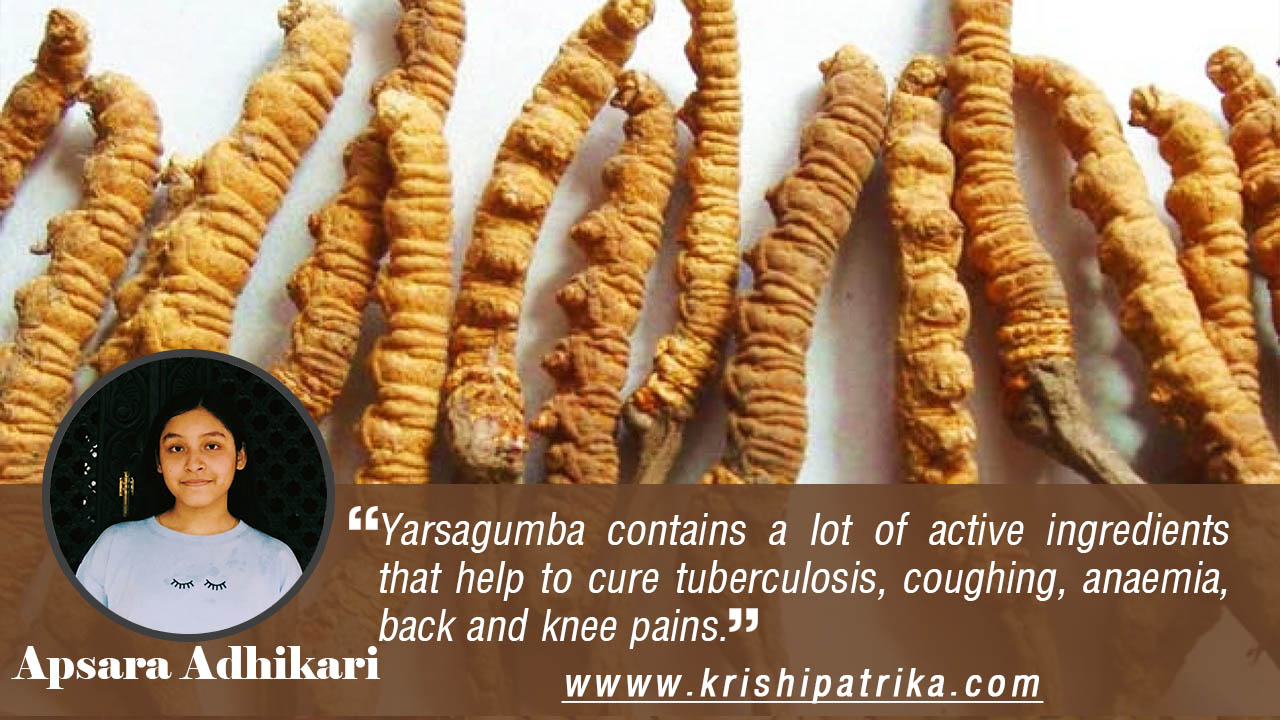 Yarsagumba (Cordyceps Sinensis), the rare caterpillar fungus, is a special type of ento-patho creature known as” summer grass – winter insect”. Yarsagumba is the world’s most expensive herbal medicine worth as much as $100 per gram. It is formed when a parasitic fungus infects and mummifies the caterpillar of a moth. Before the rainy season begins, spores of Cordyceps settle on the heads of caterpillars that live underground. The fungus gets so much into the body of the caterpillar that it grows out through the head and drains all the energy from the insect and ultimately the insect dies. It is 4 to 12 cm in length,looks like a yellowish sun-dried plant with a brownish stick at one end. It can be eaten plain or powdered, mixed with milk and water. It’s taste is fairly sweet or flavorless, which allows you to use it in almost every dish. There are a total of 500 different species of yarsagumba found worldwide. It is extremely rare to grow in alpine meadows at an altitude between 3000 -5000m in Nepal, India, Bhutan and Tibet. Best time to pick it in Nepal is in May and June. Collecting yarsa at high altitude is not easy and workers put their lives at risk. There are deaths every year from swollen rivers,steep cliffs and slippery snowfields. There is a huge amount of contribution to the national economy but also it brings some conflicts. Also climate change and overharvesting have put it at risk of extinction. There is a need for proper utilization and preservation of yarsa for its continuity.

Yarsagumba contains a lot of active ingredients that help to cure tuberculosis, coughing, anaemia, back and knee pains. It is mainly used as a tonic to increase strength and boost libido. So, yarsagumba is considered as the most valuable parasite. Nepal is the second largest supplier of yarsagumba after Tibet. Our country needs to preserve this unique herb as it is extremely useful and is nearly extinct.  Also our country has the proper resources (weather and altitude) for its cultivation. Proper use of these will serve for the national economy so we must conserve yarsagumba for its continuity .

Manang District charges local residents 8000 Nepalese rupees (8000 Nepalese rupees = ~ 80 US dollars [USD]) per person to obtain a permit to collect Yarsagumba. For people in other areas, the price is NR16000 per person (~160 USD). The fee is obviously to limit the number of collectors. Most people who collect Yarsagumba are poor. Many people cannot afford these relatively large amounts and apply for loans in their hometowns. According to buyers, the price they paid for Yarsagumba was 200\u2013500 (US$2\u20135) per NR. The price depends on the size. The price of small specimens is NR200 (US$2), medium NR300 (US$3), and large NR500 (US$5). The actual price paid by buyers to collectors seems to be lower. According to collectors, the amount they pay varies from buyer to buyer and fluctuates during the season. Buyers are intermediaries who resell the purchased goods to larger merchants. The amount that the collectors receive is much lower than the price of Yasagumba in the international market. At the end of 2006, the cost of 1 kilogram of high-quality Tibetan Yarsagumba  in coastal cities in China (including Hong Kong) and San Francisco was US $ 32,000. 2 2016 may be higher. The number of Yarsagumba specimens needed to make 1 kg depends on the region. Estimates range from 24,002 to over 5,000.5 This winter is dry, so production is low. We have found gatherers who have not yet found Yarsagumba mushrooms, or only a few gatherers have been found in the first week of the season. As an anecdote, it is reported that 75% of collectors make a profit after recovering the cost of the license, while 25% of collectors have a net loss. In a good season, many collectors can make considerable profits. It seems that fewer collectors have benefited this season than usual.

Most of the Yarsagumba harvest in Nepal occurs during the Jestha monsoon season (May to June), when thousands of people travel to areas where Yarsagumba is known to occur. Famous collecting areas include Dolpo, Rukum and Manang districts. The most popular gathering area in the Manang district is located above Yak Kharka (approximately 4,020 m) on the Annapurna trekking circuit. Yak Kharka is a small group of huts with some permanent residents. The author visited Yak Kharka about a week after the start of the harvesting season to conduct a health needs survey. Our plan is to observe living conditions and make recommendations to the Himalayan Rescue Association, a non-governmental organization (NGO) in Nepal, on possible measures to improve the health and safety of collectors.

About 800 men and women between the ages of 10 and 60 collected Yarsagumba mushrooms. They paid a high price to obtain the license, hoping to recoup costs and profits by selling the A. spp. Specimens. However, the supply of this fungus in 2016 was in short supply, resulting in a bleak economic outlook. The living conditions of most collectors are very bad, they walk a long time to the collection area in the morning and return later in the afternoon. Most people eat only one meal a day. Health problems, including acute mountain sickness, as well as respiratory and gastrointestinal diseases, are common. In recent years, Yarsagumba has become increasingly difficult to find, increasing the difficulty and the risk of injury. Health care is almost non-existent.

As the abundance decreases and demand increases, collectors are under increasing pressure to find Yarsagumba. Collectors are economically disadvantaged populations, living under severe conditions at high altitudes, poor housing and sanitary conditions, hard work, and limited food supplies. Health resources are very limited. There is a significant risk of illness, injury and death. Efforts led by government entities and non-governmental organizations can help meet health needs.