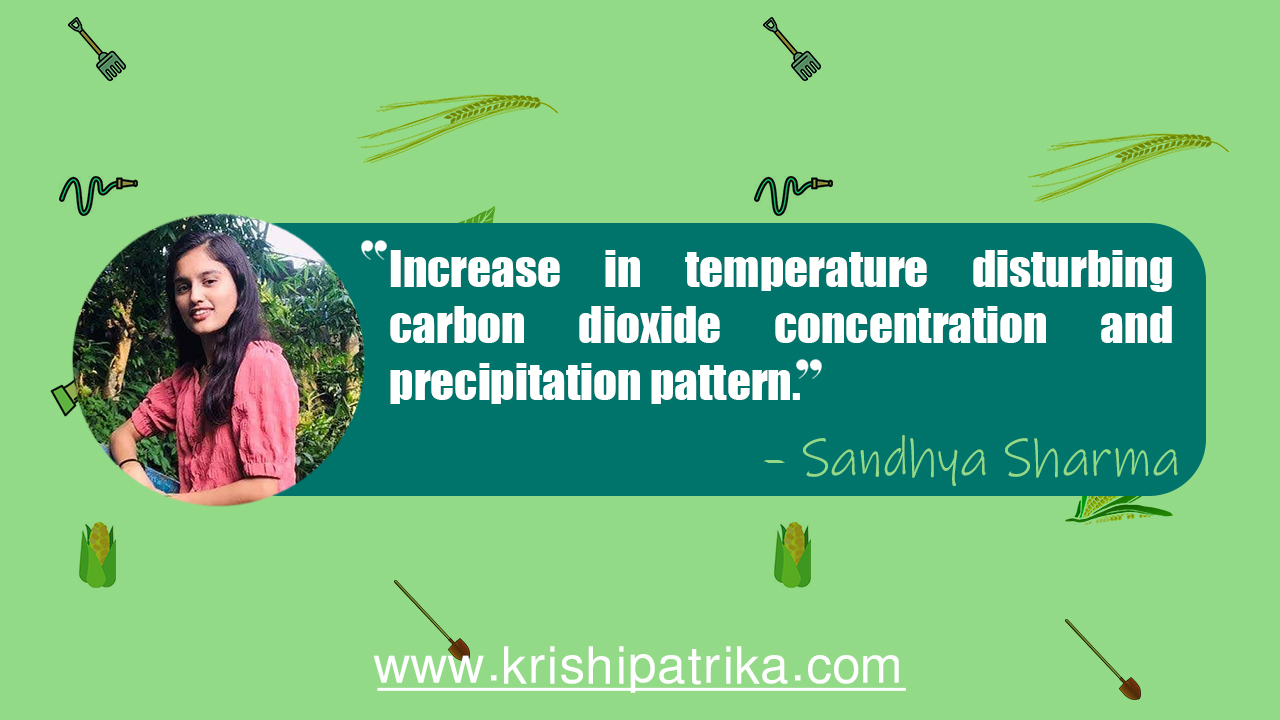 Climate change is a long term phenomenal change in the weather pattern. The official definition by United Nations Framework Convention on Climate change is that climate change is the change that can be attributed directly or indirectly to human activity that alters the composition of the global atmosphere and which is in addition to natural climate variability observed over comparable time period. Climate change scenarios include higher temperature, change in precipitation and higher atmospheric CO2 concentration which may affect agriculture on yield, growth rates, photosynthesis, transpiration rates, moisture availability through changes in irrigation and increase in agricultural inputs such as herbicides, insecticides, fertilizers, increase in pest and insects such as locust and fly armyworm etc. It affects food security, trade policy, livelihood activity and water conservation issues, impacting the large number of population.

Increase in anthropogenic activities such as industrialization, urbanization, deforestation etc. leads to emission of greenhouse gases due to which rate of climate change is much faster. Also the agricultural activities induces the climate change by emission of methane, CO2, etc through cultivation, animal husbandry.

However, climate change has both positive and negative impacts but the negative consequences is higher. Increase in global temperatures will cause an increase in evaporation rates and annual evaporation levels. Increased evaporation will lead to an increase in storms in some areas, while leading to accelerated drying of other areas. These storm impacted areas will likely experience increased levels of precipitation and increased flood risks, while areas outside of the storm track will experience less precipitation and increased risk of droughts. Increased levels of precipitation can prevent crops from growing. Dealing with drought could become a challenge in areas where rising summer temperatures cause soils to become drier. Although increased irrigation might be possible in some places, in other places water supplies may also be reduced, leaving less water available for irrigation when more is needed.

Impacts on quality and production of food

Agricultural productivity seems to be decline between 3 and 16% overall all around the world in 2080s. However in developing countries, the productivity declines by 10-25%   due to climate change. Increasing concentration of C02 has been associated with reduced protein and nitrogen content in alfalfa and Soyabean plants, resulting in a loss of quality. Reduced grain and forage quality can reduce the ability of pasture and rangeland to support grazing livestock. Thus to fulfill the protein and nitrogen content, livestock needs more forage. It may also induces malnutrition, diarrhea disease and malaria in some areas increasing vulnerability to extreme public health. Asia- Pacific region may experience the worst effect on rice and wheat yields worldwide and decreased yields could threaten the food security of 1.6 billion people in South Asia. Due to climate change, there is a urge need of pesticides and insecticides, which may pose a hazardous effect on human health and food quality.

Emergence of pest and disease

Climate change leads to increase in number of pests and diseases. Locust swarm is caused due to climate change, when climate change leads to hotter weather when coupled with wetter conditions, leads to more damage. A swarm of small locust can eat food of about 18000 people. Likewise, fall armyworm is caused due to climate change decreases the production of agriculture especially in maize. The ranges and distribution of weeds are also likely to increase with climate change. It is also known that diversity of insect species and intensity of feeding increases with increase in temperature. Any weeds, pests, and fungi thrive under warmer temperatures, wetter climates, and increased CO2 levels which compete with crops for light, water, and nutrients. The ranges and distribution of weeds and pests are likely to increase with climate change. This could cause new problems for farmers’ crops previously unexposed to these species. Also the application of herbicide, insecticides to withstand these pest will ultimately create havoc increasing climate change.

Climate change is a reality. Continuing the present methods of farming in agriculture, future agriculture is tough leading to food crisis, nutrition deficient creating a havoc for future survival. Immediate actions against climate change should be taken for creating a sustainable environment for ensuring safe food and healthy life.