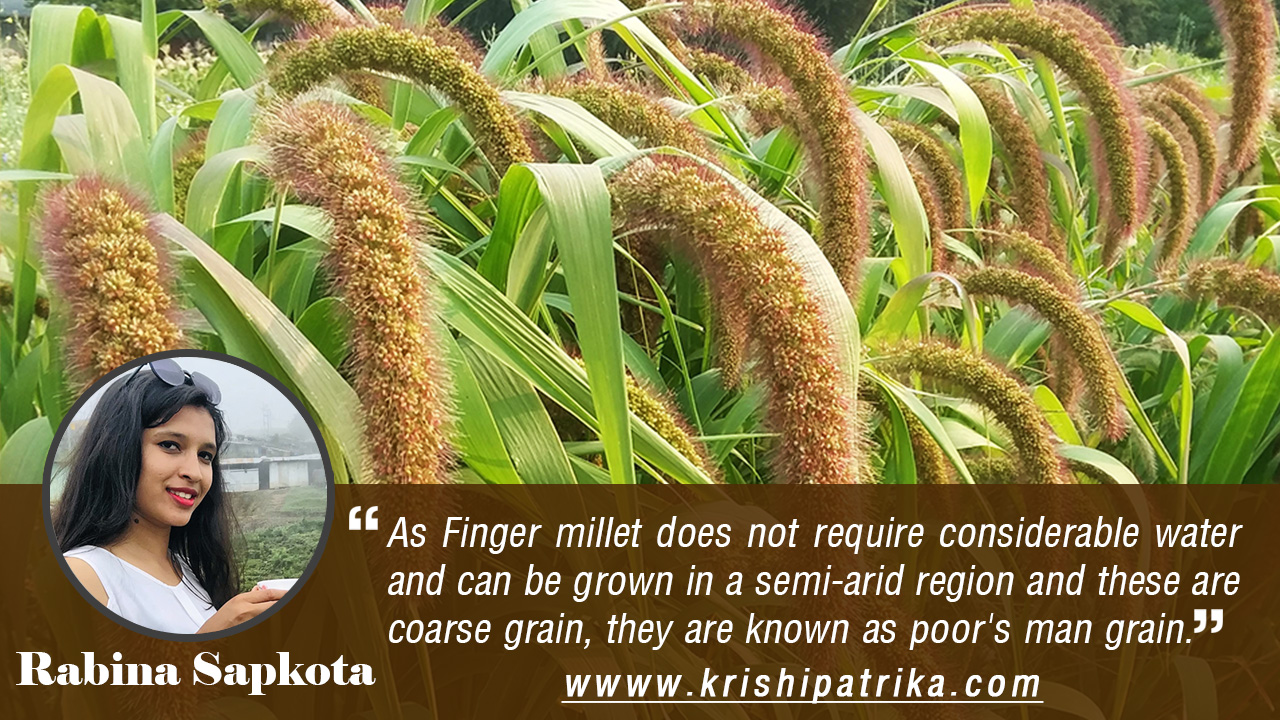 Finger millet is an important cereal crop for a staple food mainly in Africa and Asia. Finger Millet is also known as Kodo (Nepal), ragi (India), African millet (England). It ranks 4th position in cereal crops after rice, maize, wheat, in Nepal. It will grow at about 263,261 ha in 2018/19 with average productivity of 1.19 t/ha in 2019 (MoAld, 2019) which was 1.10 t/ha a decade ago in 2008/09 (MoALD, 2009). Almost in 70 districts, Finger millet is grown in Nepal. Mainly in the mid-hills of Nepal, it has a high diversity of finger millet. Udaypur is the highest productivity of Nepal. According to different researchers, Finger millets can be an important source of essential nutrients such as amino acids, carbohydrates, iron, fiber, calcium, zinc, lipids, and high-quality proteins.

Finger millet was given less important cereal crops because its nutritional value was not known. But nowadays people and research centers are more aware of nutritional and health benefits and give more attention to their research. It is rich in nutrients such as calcium, carbohydrate, protein, minerals, and fiber. The Carbohydrate content of finger millet has been reported in the range of 72-79.5%. As carbohydrates include starch, it contents 59.4-70.2%. Finger millet content 5-8% protein. It contains 44.7% essential amino acids. In other cereal crops, Tryptophan and Threonine are the most deficient amino acids but are not deficient in finger millet. Finger millet content 1.3-1.8% crude fat. It has the highest calcium and iron content among all cereals. It content 3.3-14.8%. It is extremely beneficial for growing babies. It maintains strong bones. Iron battles anemia. Finger millet is a rich source of Vitamin D which is mostly derived from sunlight, maintains young and youthful skin, and also accounts for vitality. Finger millet contains 15-20% dietary fiber, which helps with weight loss and diabetes.

Use of Finger millet

The main uses of Finger millet were food for humans. They are used as different food items like roti, dhindo, khole, and feed for growing children. This is very useful for animals. And also it is used for preparing alcoholic beverages like rakshi, wine,shiyang, and so on.

Some 795 million people worldwide do not have enough food to lead a healthy active life—and the vast majority of the world’s hungry people live in developing countries. According to UN estimates,12.9 percent of the population lacks enough nutritious food. While food security in Nepal has better in recent years, 4.6 million people are food-insecure, with 20 percent of households mildly food-insecure, 22 percent moderately food-insecure, and 10 percent severely food-insecure, according to the 2016 Nepal Demographic and Health Survey (DHS). Although this data shows the improvement there is still a very bad status of food security in developing countries like Nepal.

The multifaceted nature of achieving food security has resulted in most developing countries failing to deal with the issue. To achieve food security,  the emerging issues of climate change, GMOS, and biofuels have increased the vulnerability of these countries.

How does finger millet help to minimize food insecurity in the Hilly region of Nepal?

Due to expansion in urban population, however, are placing extraordinary pressure on food resources which results in increased food insecurity among Nepal’s mountain population. Out of total arable land (2,323.40 thousand hectares), 6-9% and 37.5% of the land are in hills and mountains. Different cereal crops like paddy, wheat, maize, millet, barley, and buckwheat are cultivated in the hilly region of Nepal. As Finger millet does not require considerable water and can be grown in a semi-arid region and these are coarse grain, they are known as poor’s man grain. So people cultivated a large amount of Finger millet. Nowadays people are concerned about a nutritious diet in daily life and know the importance of Finger millet. People from the hilly regions export finger millet which helps them to purchase other nutritious food. In this way, It also helps them to raise their financial status. The crop has excellent storage behavior and can be stored for up to two years without pesticide treatment.

Finger millet is the staple food for many people which has nutritional value. Finger millet is high in carbohydrates, energy, and nutrition. During winter it is the best grain to warm the body. Countries like Nepal, India should focus on millet production so that it could help in the industrial revolution.