Diseases: Seen in rice and its Control measures 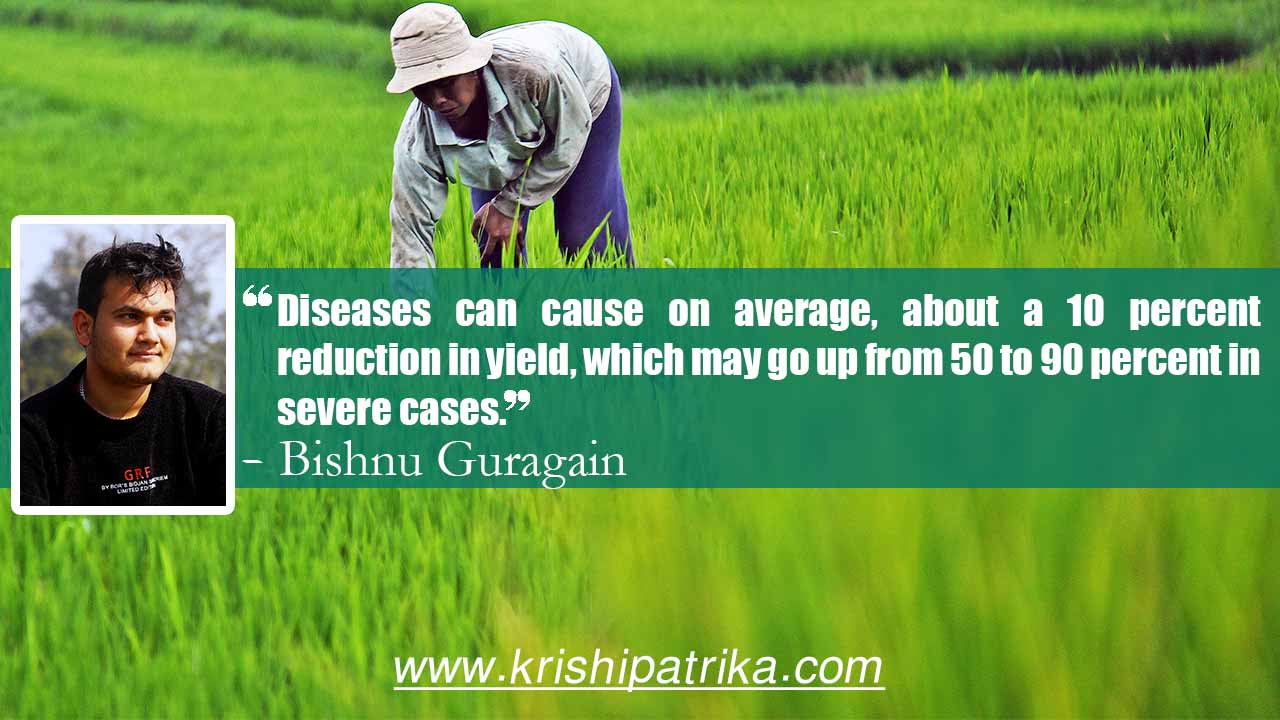 Rice is the staple food of more than half of the world’s population. It fulfills more than 50% of the total calorie requirement of the Nepalese people. From a nutritional point of view, rice contains a high amount of carbohydrates (>75%), other nutrients found are protein, vitamin B, and amino acids like lysine and threonine. Diseases can cause on average, about a 10 percent reduction in yield, which may go up from 50 to 90 percent in severe cases. Planting the resistant variety is the simplest and often the most  cost effective  management of diseases. Some diseases occurring in rice are discussed here:

-Plants infected with false smut have individual rice grains transformed into a mass of spore balls. These spore balls are initially orange, and then turn into greenish-black when they mature.

● Reduce humidity levels through alternate wetting and drying (AWD) rather than permanently flooding the fields.

● Use moderate rates of Nitrogen.

● Older lesions on the leaves are elliptical or spindle-shaped and whitish to gray centers with red to brownish or necrotic borders.

● Other symptoms include: Some resemble the diamond shape, wide in the center and pointed toward either ends, Lesions can enlarge and coalesce, growing together, to kill the entire leaves.

● It is a fungal disease that infects the coleoptile, leaves, leaf sheath, panicle branches, glumes, and spikelets.

● Infected seedlings have small, circular, yellow-brown, or brown lesions that may girdle the coleoptile and distort primary and secondary leaves.

● Starting at the tillering stage, lesions can be observed on the leaves. They are initially small, circular, and dark brown to purple-brown.

● Fully developed lesions are circular to oval with a light brown to gray center, surrounded by a reddish-brown margin caused by the toxin produced by the fungi.

● Treat seeds with hot water (53−54°C) for 10−12 minutes before planting, to control primary infection at the seedling stage

● Add muriate of potash to correct the potash deficiency in the soil. Apply balanced NPK fertilizers.

Give 3-4 sprays with 0.2% Zineb or Mancozeb 75 WP at an interval of 10-13 days just before the appearance of initial symptoms of the diseases.

●The lesions are translucent when held against the light.

● Entire leaves may become brown and die when the disease is very severe.

● Under humid conditions, yellow droplets of bacterial ooze, which contain masses of bacterial cells, may be observed on the surface of leaves.

● Use certified seed from a reliable source or treat seeds with hot water.

● Give 2 sprays of Streptocycline 12g or Agrimycin -100,75g in 500 liters of water per hectare. The first spray should be given as and when the initial symptoms at the disease are observed followed by another spray after    10-12 days. ● This disease is caused by zinc deficiency.

● Usually appears in nursery but may appear, in patches, after 10-15 days of transplanting.

● Growth of the diseased plant is stunted.

● High yielding varieties show chlorosis between the veins of new leaves, where brown spots are formed.

● Use fertilizers that generate acidity (e.g., replace some urea with ammonium sulfate).

● Apply organic manure before seeding in the nursery or transplanting rice in the main field.

● Give a second spray as above on the 20th day in the nursery.

● Give third spray as above in the main field after 15-20 days of transplanting, if symptoms appear in the field.