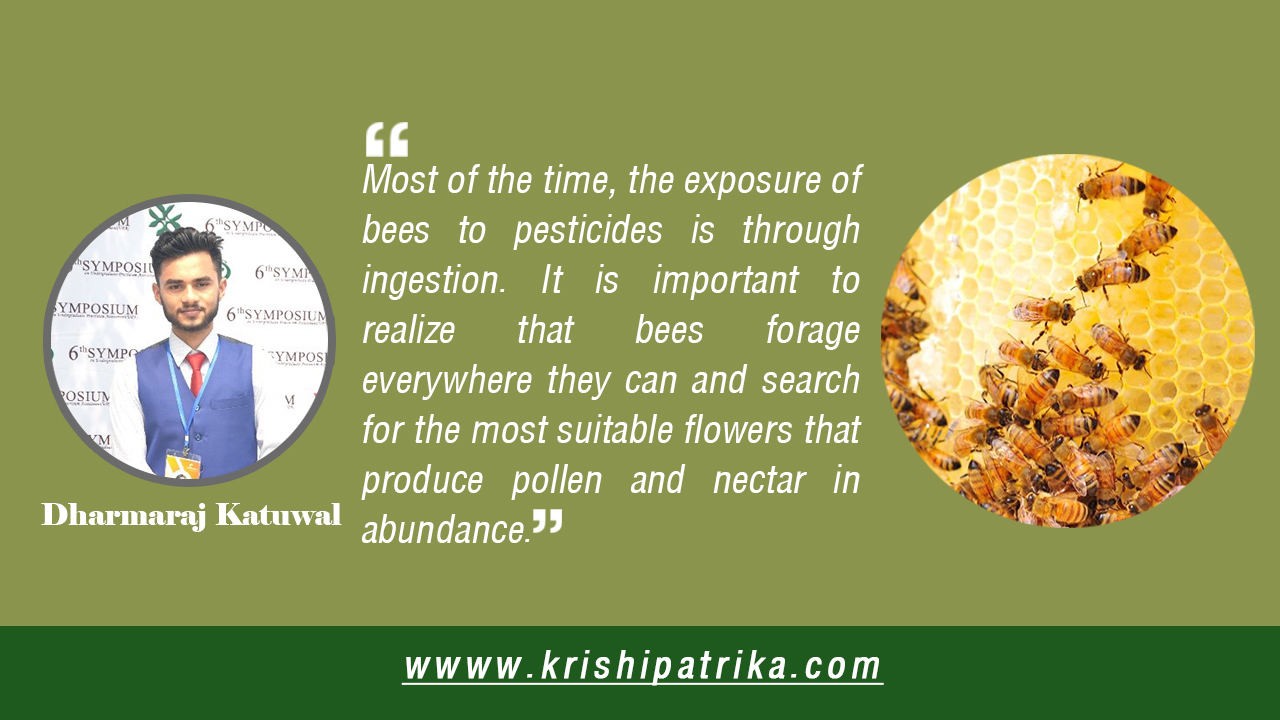 Honey bees are social flying insects within the genus Apis and family Apidae. They are found worldwide from the tropics to subarctic temperate zones and on all continents except Antarctica. In the mid21st century, just seven types of honey bees were recognized, with a total of 44 subspecies. The best-known honey bee is the western honey bee which has been domesticated for honey production and crop pollination. Honey bees pollinate 71 crops out of 100 most common crops that account for 90% of the world’s food supply, which makes them efficient pollinators of crops. Nepal is known for its ancestral technology of beekeeping. Though apiculture began 20 years ago it is still not very developed. Different species of honey-producing bees are found in Nepal. Only two of them are raised for apiculture: Apis cerana and Apis mellifera. A. Cerana lives in Nepal at an altitude of 60 to 3500 m whereas A. Mellifera lives at an altitude up to 1500 masl. A. Cerana is very famous in Nepal because of the low cost of its beehive, the log hive.

Beekeeping is an essential agricultural activity, not only for providing hive products as honey, pollen, wax, royal jelly, etc. but also for assuring the pollination of a large number of crops. It has been determined that 35% of the world’s food sources derive from insect-pollinated crops. Honey bees provide the pollination service for the cultivated as well as wild vegetation, thus playing a major role in the landscape and natural resource preservation. The intense foraging activity of honey bees is the most relevant behavioral trait that exposes them to agricultural pesticides and contaminants. A honey bee can perform numerous foraging flights per day, with a distance from the hive that may vary between 1.5 and 6 km, even though long-range flights of more than 10 km have been recorded also. During their foraging activity, honey bees collect considerable quantities of pollen and nectar that they bring back to the hive for adults and larvae. Therefore, the contamination with plant protection products might not only occur in the field but also within the hive. In this process, the large quantity of pesticide presence in the environment, especially due to intensive agricultural practices is considered a relevant threat to bee and colony health.

Most insecticides are applied as sprays over the crop canopy, but sprays of herbicides and fungicides are usually applied directly on the soil before the planting of crops. In all cases, droplets and dust from the applications can fall directly on the bees that fly across the treated fields or nearby because wind can carry the tiny droplets and dust particles hundreds of meters away from the crop. Granular pesticides that are incorporated into the soil have no direct exposure to bees. The residues of systemic insecticides are present in all parts of the treated plant, including the flowers, pollen, and nectar. Not only the crop plants but also the weeds and bushes that grow in the vicinity are affected because they also take up small amounts of residues that spread through the soil through lateral water flow.

Most of the time, the exposure of bees to pesticides is through ingestion. It is important to realize that bees forage everywhere they can and search for the most suitable flowers that produce pollen and nectar in abundance. Thus, some crops are more attractive than others. Pesticide residues remain in pollen and nectar are taken up by the forager bees to their colonies and remain in the beebread and honey for a certain period. Larva and queen feed upon these residues which are affected in similar ways as the forager bees. In addition to food, bees also drink water to keep their body temperature under control. Pesticide residues in soil move into the water and appear in the streams, and ponds of agricultural areas which are thus contaminated with a mixture of agrochemicals.

The possibility for a honey bee to be exposed to pesticides depends both on the product formulation and on its characteristics. These two features contribute to determining the environmental persistence, dispersal, and contamination of food sources for honey bees. There are various ways of pesticide exposure to bee as: Figure: Schematic representation of routes of exposure of honey bees to pesticide

Chemical pesticides have been expressing increasing acute toxicity, thus requiring lower quantities to be effective. Physical characteristics are also relevant as they allow translocation of several molecules through the plant phloem, thus presenting a more complex risk assessment. Systemic insecticides represent at the same time the most effective type of plant protection products and one of the most important threats to honey bees as they contaminate essential food sources for pollinating insects. A repeated (i.e. chronic) intoxication may cause delayed effects.

According to the European regulation on risk assessment of pesticides to honey bees, the toxicity is evaluated by calculation of acute LD50 (lethal dose) and CL50 (lethal concentration). These two parameters aim to estimate product toxicity by considering the number of individuals that die after 48 hours from acute exposure. Concerning insecticides, the acute toxicity of active ingredients has been augmenting together with the introduction of new molecules; the most recently released products, neonicotinoids, and phenyl pyrazoles, exhibit significantly higher toxicity compared to all the other chemical classes. This fact contributes to give evidence to the hazard posed by neonicotinoids to honey bees, since very small doses may involve a considerable effect on mortality.

Sub-lethal doses or concentrations are defined as the quantities of a substance that do not cause a significant mortality effect. The study of chronic effects of sub-lethal doses on mortality has well demonstrated that the duration of exposure may strongly influence the mortality effect. The ingestion of imidacloprid sub-lethal concentrations for 10 days or 40 days, might lead to high mortality, ranging from 50 to 100 %. Sub-lethal doses of imidacloprid have caused a reduction of honey bee capacity in reacting to an odorous stimulus both in laboratory and semi-field conditions. Furthermore, sub-lethal effects might also be evaluated at a colony level. Since the colony has to be considered as a superorganism, the toxic effects on individuals can have an important role in influencing the hive development. This phenomenon might be particularly important if pesticide exposure impairs, for example, queen bee or brood health.

Pesticides have a different mode of action and are designed to control specific target pests by interfering with different metabolic pathways. Thus, insecticides kill insects by disrupting their nerve activity, molting process, or other specific metabolism.

Table: Toxicity of common pesticides to bees (LD50 at 48 hours) by contact or oral exposure and their persistence in soil (half-life). Spray drift is the major cause of mortality of forager worker bees whereas ingestion of contaminated pollen, nectar, and water is at the root of the Colony Collapse Disorder (CCD) that affects many apiaries of the world, affecting mainly the nurse workers and the queen in particular.

Pesticide applicators and beekeepers should be aware of the landscape environment in which they managed bee forage, bearing in mind that a large proportion of the land in developed and developing countries is used for agricultural production where pesticides of all kinds are used regularly. Since the usage of these plant protection products cannot be stopped, as they are necessary for agricultural production, a rational approach must look at minimizing the risks of such agrochemicals to bees. Bees are generally active between sunrise and an hour or two before sunset (mostly 9-11 am) and most honey bees forage within a 2–4 km radius of their hive, although may travel as far as 7 km or more in search of pollen and nectar. Therefore, pesticide risk to bees can be reduced by spraying the crops in the evening, when bees are not foraging.

Despite all precautions, if an area in which the crop or weeds were in the flowering stage has been sprayed unintentionally, the farmer should notify the affected beekeepers for them to take appropriate action. This should ensure the managed bees are kept out of that sprayed area for a while.

The honey bees are considered the most important among all the pollinators as they are responsible for achieving global food production demand every year. With the continuous increase in population, humans have constantly been searching for a way to maintain this demand for global food production. To achieve this goal, conventional agriculture has evolved over the centuries. In this process, for the proper management of insect, pest, plant pathogens, and weed plants in agro-ecosystem various chemical pesticides were discovered and used haphazardly. These chemicals were entered into the body through various routes like direct, indirect, and ingestion routes and toxic to both individual and colony levels. Although several studies have been done regarding pesticide toxicity to honey bees, a proper management strategy is still lacking. However, all pesticide applications should be done in a way to minimize their exposure to honey bees, which helps to prevent the further decline of the honey bee population throughout the world.