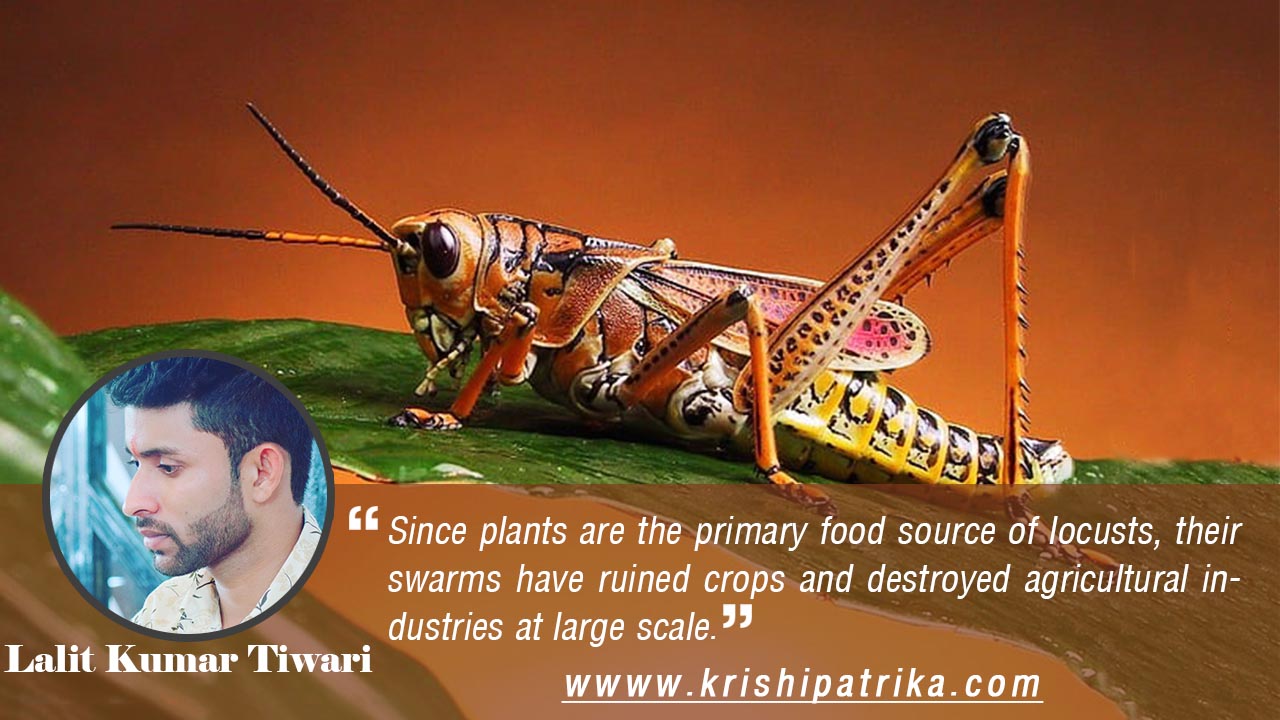 Locust are the species of insects that fall under the family Acrididae and the order Orthoptera. Locusts are found all over the world and look very similar to grasshopper insects. Very often the locusts are mistaken for grasshoppers. The characteristics of Locust vary depending on the species. For example the Locusta migratoria known as Migratory locust, is found in grasslands of Africa, South Europe, Australia and New Zealand. Similarly the South American locust known as Schistocera paranensis is abundantly found in central and southern parts of America. Since plants are the primary food source of locusts, their swarms have ruined crops and destroyed agricultural industries at large scale.

After fertilization, the female locusts usually lay her eggs inside holes made in warm, damp soil or sand known as pods. The female locusts produces a fourth liquid that encloses the eggs which ensures hydration and protection from predators. After this the eggs undergo further development and enter the nymph stage.

After 10 days to 2 weeks of egg laying, the eggs hatch and nymphs come out. These newly hatched locusts are called hoppers or nymphs. Gradually as the nymph grows, they shed their skin or molt five times. These molting phases are known as instars. After the fifth instar, the nymph has developed wings and functioning reproductive organs.

After the fifth molting, even though the nymphs have fully grown wings, they are still soft and fragile. Due to this the fledglings are unable to fly yet. During this stage, the exoskeleton of fledgling locust becomes harder. Fledglings also consume large amounts of plants in order to conserve energy for reproduction and wing development.

After about 2 weeks, the fledglings become sexually mature. During this stage the adult locust is mostly migrating and constantly feeding. Adult locusts tend to gather in large groups and invade green plants or crop fields. The life expectancy of adult locusts is around eight to ten weeks. During this the male and female locusts mate, the female locusts lay eggs and the entire cycle begins again.

As the report of FAO, normally a single locust can consume up to 2 gm per day. The group can be spread upto 1 km and they might be upto 4-8 crores in numbers which can consume food which can feed upto 35000 people per day. It can travel upto 150 km per day and rests on plants and bushes.

What do they eat?

-These locusts feed on plants (i.e. wide range of food)

-They feed equal to their body weight per day due to which their body growth is rapid and damage is severe.

-These locusts damage the crops in the group.

It can damage plant leaves, fruit, flowers as well as the whole plant.

The entire tree or plant might break because of the weight of the group of Locusts on a particular plant/tree.

The excreta of locust may cause physiological disorder as well as disturb the metabolic activities.

Sometimes it can be allergic to humans.

Chemical method is the appropriate method to control Locust. The best time to spray chemicals in the field is 1-2 hrs after sunrise. While spraying chemicals, one should use a mask, gloves and other safety kit.

The following chemicals can be sprayed in the given recommended dose: