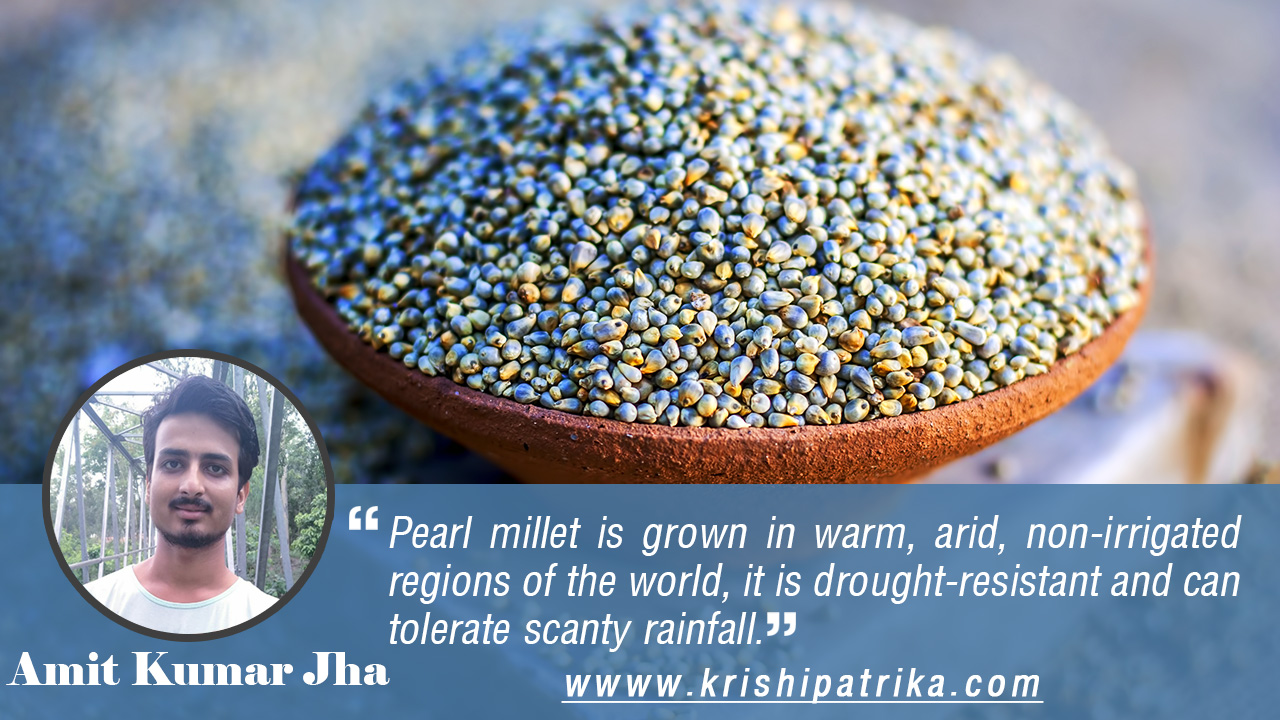 Bajra (Pennisetum Typhoideum) is an indigenous plant of Africa. This forms the staple diet for poor people. Its stalks are used as fodder for cattle and thatching purposes. Bajra is a crop of dry regions of the country. It occupies 6.8 percent of the total area under food grains and 8.3 percent of the cereals in the country.

Pearl millet originated from Africa and then spread to India and other countries. Bajra has been widely grown in Africa and Asia since prehistoric times. In Asia, it is an important millet crop of India, Pakistan, China, and South-Eastern Asia. The important pearl millet growing countries are India, China, Nigeria, Pakistan, Sudan, Egypt, and Arabia India is the largest producer of pearl millet in the world Bajra is extensively cultivated as a rain-fed crop in red, black, and sandy soils during Kharif season.

Pearl millet is grown in warm, arid, non-irrigated regions of the world, it is drought-resistant and can tolerate scanty rainfall. Requires 20-50cms of rainfall annually. Temperature requirements are from 10-45 degrees Celsius.

SOIL AND ITS PREPARATION

Well-drained sandy loam to loam soil with a pH range of 6.5 to 7.5 is ideally suited for its growth. The crop does not tolerate soil acidity. The field should be thoroughly prepared and leveled for weeds sowing. Better crop stand growth is obtained on well-prepaid soils. One plowing followed by two harrowing and planking is sufficient to get a good seedbed. The crop can’t tolerate longer water stagnation. Hence, a good drainage facility is important.

For summer sowing, March to mid-April is the best period. Monsoon season crop should be shown preferably during the first fortnight of July after commencement of rains. SEED RATE AND SOWING METHOD

Sowing should be done in lines at a distance of 25 cm from row to row, using a seed rate of 10-12 kg/ha. Being a small seeded crop. Its seed should not be placed more than 1.5-2 cm deep. The seed should be treated with agrosan GN or thiram @ 3g/kg seed before sowing to control seed-borne pathogens.

Forage pearl millet is grown in association with guar, cowpea, and semi-arid to arid areas. The intercropping of pearl millet +cowpea in a 1:1 row ratio has been found superior in most of the growing situations.

Application of 10-ton FYM /ha to the crop matches the requirement of secondary and micronutrients. Basal application of 50:30:30 kg N: P2O5:K2o / ha should be given at sowing time followed by top dressing with 30 kg N/ha one month after sowing. In rainfed situations 20-30 kg N/ha may be applied coinciding with rain at the 30-35 days stage. If dry spell prevails, spraying of 2 percent urea solution should be done for quicker biomass production. Azosprillium treated seed improves the yield and saves 15-20 percent less nitrogenous fertilizers.

July sowed rainy season crops may also need 1-2 irrigation, depending upon the distribution of rains. For summer-sown crop 4-5irrigation with on is required due to high evaporative demand.

Pearl millet is attacked by many insects and disease pathogens. ergot, downy mildew, and smut are the most common diseases. Seed dressing with metalaxyl @ 2 gm/kg seeds or spray of Ridomil @ 1000 ppm is considered an effective control method. Shoot fly is the common insect attacking the pearl millet, which can be controlled with a spray of carbofuran @ 125 ml per hectare. Clean cultivation and seed treatment are adopted for reducing the damage from insect pests and disease in forage pearl millet.

Harvesting of single-cut varieties is to be done at 55-60 days after sowing (initiation of flowering)  whereas, in the case of multicast varieties, first cut at 40-45 days after sowing and subsequent cuts are taken at 30 days of interval. Irrigated crop yields 30-35 quintals /ha while unirrigated 12-15 quintals.

If we cultivate pearl millet with the proper amount of nutrients and water we can have better yield from our field. Pest diseases and weeds must be controlled before they attack the crops in the field so that we can be safe from the reduction of the crop yield in the field.