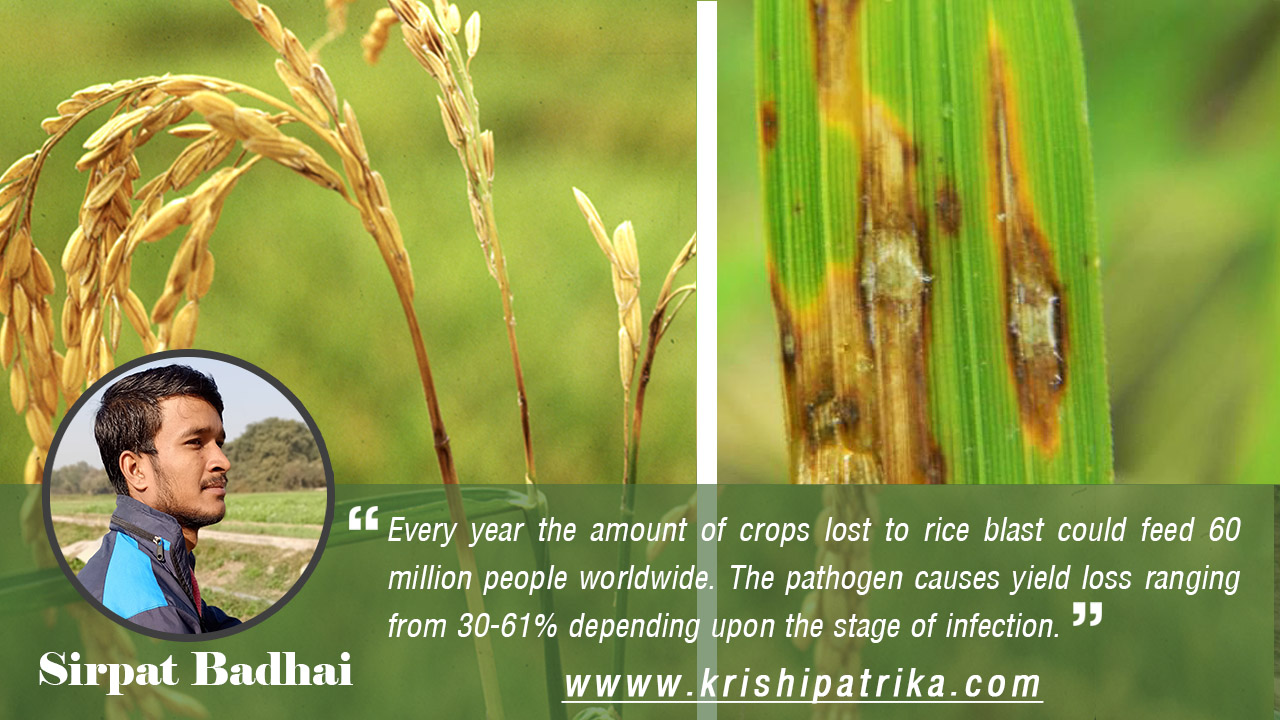 Economic importance: Rice blast is the most important disease concerning the rice crop in the world. Since rice is an important food source for much of the world, it’s effects have a broad range. Every year the number of crops lost to rice blast could feed 60 million people worldwide. The pathogen causes yield loss ranging from 30-61 % depending upon the stage of infection. In severe cases, losses amounting to 70-80 % of grain yield are reported.

This disease fungus attacks the crop at all stages from seedlings in the nursery to heading in the main field. The typical symptoms appear on leaves, leaf sheath, rachis, nodes, and even the glumes are also attacked. together as the disease progresses and large areas of the leaves dry up and wither. Similar spots are also formed on the sheath. Severely infected nursery and field show a burnt appearance.
■ leaf blast: on the leaves, the lesions start as small water-soaked bluish-green specks, soon enlarge and from characteristics spindle-shaped spots with a grey center and dark brown margin. The spots join Node blast: in this case nodes are infected, irregular black areas that encircle the nodes can be noticed. The affected nodes may break up and all the plant parts above the infected nodes may die (Node blast ).

■ Neck blast: At the flower emergence, the fungus attacks the peduncle which is engirdled, and the lesion turns to brownish-black. In early neck infection, grain filling does not occur and the panicle remains erect like a dead heart caused by a stem borer. In the late infection, partial grain filling occurs. In the case of heavily infected panicles, small brown to black spots also may be observed on glumes.

Forecasting: forecasting blast of rice can be made based on minimum night temperature range of 20-26 °c in association with a high relative humidity range of 90 % and above lasting for a period of a week or more during any of the three susceptible phases of crop growth, viz, seedlings stage, post transplanting tillering stage and neck emergence stage.the first leaf model was developed and named as BLAST in Japan.