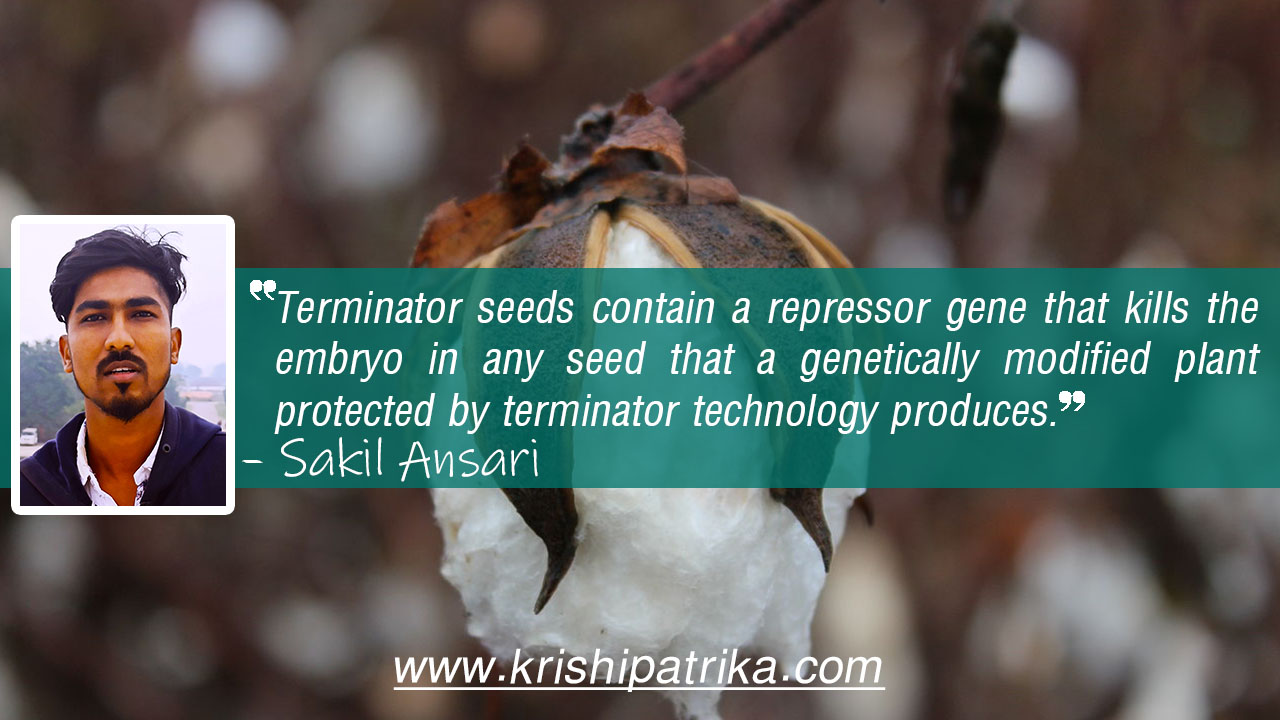 What Is a Terminator Seed?

Genetic use restriction technology, also known as terminator technology or suicide seeds, is the name given to proposed methods for restricting the use of genetically modified plants by activating some genes only in response to certain stimuli, especially to cause second-generation seeds to be infertile. It is a major violation of the right of farmers to save and reuse their seeds. Because the crops produce sterile seeds, farmers need to buy a new batch of seeds every year rather than using the traditional farming method of saving, reusing, and sharing seeds.

Some biotechnology firms use seeds that require the farmers to use a special compound to activate the seed so that farmers that are using genetically modified seeds become dependent on the biotechnology firm if they want to plant the seeds from their crops.

Any technology that the biotechnology firms use to prevent the farmer from saving, sharing, or reusing seeds and control the reuse of seeds threatens both biodiversity and sustainable farming methods in developing countries.

In March 1998, Delta and Land Pine Company of Scott, Mississippi, received the genetically engineered terminator seed patent. This seed prohibits the natural evolution of the crops from occurring and instead stops the growth process of the seeds’ second generation before they can mature. Monsanto claims the terminator seed would solve the problem they created of genetically modified crops contaminating neighboring crops. Fear quickly arose from this announcement, and later became a governmental concern once giant agricultural biotechnology corporation, Monsanto acquired Delta and Land Pine Company – the mastermind behind the feared terminator seed. Although Monsanto pledged to not commercialize the seed, tensions grew between chemical, seed, and biotechnological companies; meanwhile, movements against the terminator seed were led by consumers, environmentalists, and sustainable development activists.

These genetically modified seeds have little benefit to the farmers. Those who are an advantage are the seed companies. The seed prevents farmers from re-planting seeds throughout the seasons by producing a sterile seed that cannot reproduce. This forces the farmer to turn to commercial seeds, profiting the large corporations and “creating greater dependency on proprietary seeds and their companion chemicals”. Another advantage would be the improvements for monopoly seed pricing decreasing price discrimination between farmers. But this again benefits the seed corporations as well, by paying farmers equally, with no risk of paying a farmer who reuses their seeds (less expensive for the farmer) the same as a farmer who does not.

Aggressive marketing schemes target uneducated farmers, unable to see through the scientific claims being promoted by the major agrochemical corporations. The introduction of the terminator seed means the traditional method of saving seeds for certain environmental conditions is obsolete. Without a farmer’s ability to alter their seeds as environmental conditions change, their resources will deplete. Those who can’t afford to replace seeds seasonally, such as those in developing countries, are greatly impacted by the disposability of the terminator seed. Poorer farmers of the tropics and subtropics produce 15-20 percent of the world’s food and encourage genetic diversity in plant breeding. Not only are the farmers at a loss, but also the population’s food security. Even the better-off farmers of developing countries are at risk, as the need to re-purchase seeds increases costs and control through licensing agreements, leaving the resource-poor farmers to “lose their ability to determine their own lives – transforming them to meet the demand of their new masters’ ‘. This isolates farmers from the corporations, harming their much-needed relationship.

How Do Terminator Seeds Work?

Terminator seeds contain a repressor gene that kills the embryo in any seed that a genetically modified plant protected by terminator technology produces. Even though the seeds produced by the plants look normal, they are not viable and cannot be used to plant more crops, which forces the farmer to buy new seeds from the biotechnology firm selling the genetically modified plant.

Since saving and cross-breeding seeds is an integral part of traditional African practices, farmers in African countries are much less likely to use terminator seeds than farmers in other third-world countries. Methods in Africa are more sustainable than the solutions offered by biotechnology firms.

The country’s rich genetic diversity will be lost. The maximum crop field may be covered by just one genotype, and it will eliminate the farm conservation traditions and location-specific varieties.

While the world understands the increase in food demand and the possibility of technology being the answer to this demand, biotechnological companies appropriate such needs. Terminator technology not only affects farmers but the population which they feed, which could scale from a developing village to the world’s demands. This is why the terminator seed is contested throughout academics, activists, and citizens, and seems to solely be supported by its owner: Monsanto.